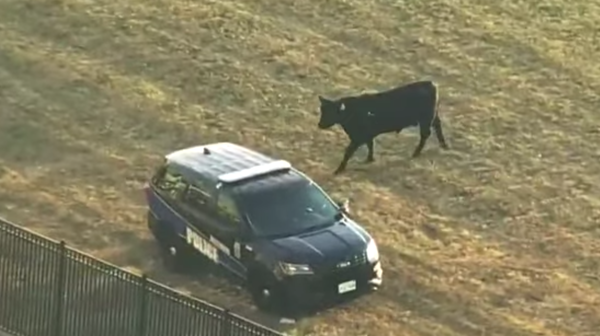 A bull had a field day in Baltimore on Wednesday, spending three hours on the loose before succumbing to tranquilizers. It’s the third bull to escape this year in Baltimore.(Image credit: WUSA9/Screenshot by NPR)

via A Bull Has An Afternoon Out In Baltimore — News : NPR

I can sing louder than you: It’s A Birb Thing

Those of us birbs who live with other feathered friends know all too well that one buddy who just has to prove that their vocal solos are the best and the loudest right? In Lavender’s February It’s A Birb Thing, Cheeks demonstrates her marvelous – and loud, vocal range (perhaps to the chagrin) of her […]

In addition to a lot of gorgeous birds, we’ll visit Guido’s research station on a remote mountain in eastern Panama. From there it is up into his cloud forest preserve, where dozens of new species have been discovered. Panama! Birds and Possibilities, with Jess Morton: Zoom Evening Meeting reminder Tuesday, 2 February, 7:30 p.m. — SANTA […]

You may enlarge any image in this blog by clicking on it. Click again for a detailed view. Peregrine Falcons aren’t the only birds of prey that live in our neighborhood. Cooper’s Hawks are the predator that I see most often when I drive around our community. I often see as many as three or […] […]

Hormones. One word that strikes fear into the heart (and fingers) of many a parront. Our feathered companions are, like humans, governed by fluctuating and often irreconcilable hormones that wreak havoc on their behavior – and often, ours. Living in human households produces many good, and some not so good, birdie behavior. This is especially […]

Say What? Beneath the Cage Grate

In the February edition of Beneath the Cage Grate, Morty catches up with the saucy beaked parrots of Lincolnshire Park in the United Kingdom. It seems some ‘remedial behavioral’ intervention by zookeepers has only helped to ramp up this flock’s salty language. Follow along here as Morty investigates how the Lincolnshire Park Greys have ‘settled […]