Wimbledon was canceled on Wednesday because of the coronavirus pandemic, the first time since World War II that the oldest Grand Slam tennis tournament won’t be played. The All England Club announced after an emergency meeting that the event it refers to simply as The Championships is being scrapped for 2020. Wimbledon was scheduled to…

Seven-time Wimbledon champion Serena Williams has been handed a $10,000 fine for damaging one of the practice courts with her racquet. The incident occurred on an outside court during a training session on June 30, the day before this year’s grass grand slam began, according to organizers. “I haven’t really thought about it, to be honest,” Williams, who has…

via Serena Williams Fined $10,000 for Repeatedly Smashing Her Racket on Wimbledon Court — KTLA

Rafael Nadal is reportedly getting ready to tie the knot to Maria Francisca Perello after a 14-year-long relationship! Rafa is engaged to longtime girlfriend, Maria Francisca, reports Hola magazine. In fact, the wedding is only a few months away! The pair plan to get married during the autumn in Mallorca and it has emerged that Rafa […]

So let me get this straight, Serena and others are calling the game and yesterday’s Women’s Final’s alleged ‘bad calls’ sexist, yet the women get the same prize money as the men regardless of the fact that the women only play three sets vs the men’s five.  Yes, the game is sexist – in favour of the women!  Serena was getting coaching from her player’s box, that was blatant.  Then she broke her racket, warranting a point penalty.  Then, she calls Chair Umpire Carlos Ramos a liar and a thief, warranting a full game penalty.

As someone who watches every major tennis tournament with enthusiasm and anticipation, I applaud Ramos for standing firm and enforcing the rules.  This is not an issue of past alleged poor officiating, it was about what Serena did yesterday, at the 2018 US Open Women’s Final.

Should chair umpires enforce the rules more consistently, yes.  Should other players – men and women, be more harshly sanctioned, yes.  But this does not or should not detract from the reality that at yesterday’s Final, Serena Williams was offside.  She (and her coach) committed each of the offenses and, based on the rules, should and was penalized rightly because of those actions.

It’s not sexist: it’s not about Cornet’s shirt changing penalty or Serena’s 2018 French Open catsuit sanctioning, it’s only about what happened yesterday.  In my opinion, both Serena and Roger Federer get special treatment on almost every court on which they play, and that’s not fair either.

Of course there’s sexism in tennis.  I applaud Serena for what she and other female players have done to help level the playing field and elevate the women’s game to its rightful place.  However, in this instance, this was an example of poor behaviour, not sexism – and poor behaviour is a universal human failing.

Below from The Guardian

Tennis players past and present have rallied behind Serena Williams after she claimed the sport was riddled by sexism following an extraordinary on-court tirade at an umpire during the US Open women’s final.

The 23-time grand slam winner said she was fighting for the future rights of women players by publicly criticising the chair umpire Carlos Ramos for what she interpreted as double standards. The final was won by Naomi Osaka of Japan – with the enormously talented 20-year-old claiming her first major title – but it will be remembered for the controversy prompted by a furious outburst from Williams.

I saw and heard the exchange between Kyrgios and Chair Umpire Mohamed Lahyani, and I believe it was based on genuine concern on Lahyani’s part to encourage Kyrgios to start playing to the elite level of which we all know Nick is capable.  Lahyani was not coaching, and for the matter Kyrgios wouldn’t listen even if he was.  The biggest issue I have with this whole ‘controversy’ is the fact that the women can and do have coaching while on court – not from umpires granted, but coaching just the same, so why can’t the men (again, not by chair umps, but coaches)?  And my pet peeves: why are the women still playing only 3 sets at the slams, receiving coaching while on court, but getting equal prize money?  It’s not equal time or effort.

Based on the last few days of ‘discussion’ regarding Serena Williams’s attire on court, I implore, especially the media, to get back to focusing on the game, on court, and not fashion and what or who someone is wearing: it belittles women’s tennis and women’s sports in general.  Serena said her French Open catsuit was ‘medically necessary’.  If that’s the case, why isn’t she wearing something similar now?  I doubt the tutu was medically necessary for avoiding potential blood clots.  I totally sympathize with Serena and her need to address serious health issues but, as she admitted during the French Open, the catsuit was more of a statement – a ‘superhero’ nod to new moms.  Again, with all due respect to Serena, she’s a superb, some say the best, women’s tennis player ever, THAT’S being a superhero, not wearing a catsuit.

I think it’s time for the ATP, WTA, and all tournament organizers to take a close look at the unequal rules and protocols in professional tennis.

Read the Associated Press’s article (via MSN) here.  Below is an excerpt.

“NEW YORK — Nick Kyrgios was losing big at the U.S. Open on Thursday, and barely even trying. Didn’t move while so-so serves flew by for aces. Casually put groundstrokes into the net. Double-faulted without caring.

The crowd began booing. The chair umpire, Mohamed Lahyani, decided to intervene. In an unusual sight for Grand Slam tennis, Lahyani clambered down out of his seat during a break between games, leaned over with hands on knees, and spoke with the 30th-seeded Kyrgios, saying, among other things, “I want to help you.”

As much as I respect Serena, I agree with the French Open’s decision to ban Catsuit-type clothing.  The suit diminished the sport itself, promoting Serena and individualism instead.  If you want to play tennis, then play tennis and respect the tournament, there’s no need for theatrics or the wearing of apparel that screams sex or ‘superhero’.  The superhero qualities come from what players do on court, not from the skimpy, skin-tight outfit they wear.  There must be other clothing styles Serena can wear that will do as good if not better a job at promoting good blood flow and prevent potential blood clots. 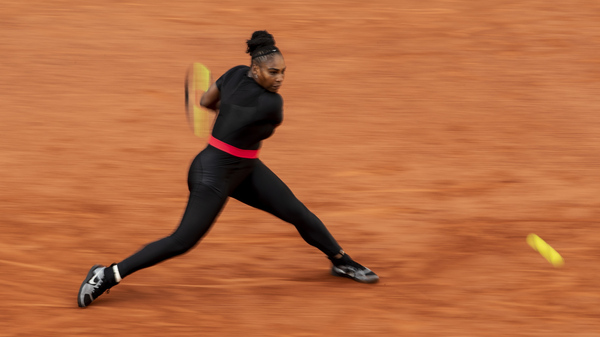 An emotional Andy Murray broke down in tears after pulling out a hard-fought victory over Marius Copil at the Citi Open early Friday morning. The former world No. 1—currently ranked 832nd—wept into a towel for several minutes after defeating Copil 6-7, 6-3, 7-6 in a round of 16 match that lasted for more than three…

via Andy Murray Breaks Down in Tears After Emotional 3 a.m. Victory While ‘Closing Time’ Plays — TIME

World No.1 and fan favorite Rafael Nadal takes time to connect with young fans at the local hospital in Valencia.

Rafael Nadal is in Prague, with the days counting down ahead of the first-ever Laver Cup. The three-day competition kicks off Friday, pitting a team of the best six European players against the top six from the rest of the world, captained by tennis legends Bjorn Borg and John McEnroe. The tournament is to honor Rod […]

You may enlarge any image in this blog by clicking on it. Click again for a detailed view. Today, more portraits of Great Horned Owls. My friend Dan, who seems to know where every nesting pair of Great Horned Owls in the Tucson metropolitan area is located, invited me one evening a couple of weeks […] […]

Magpie and Fox It seems we now have a resident Fox, who has stayed in the fox hotel three nights in a row and likes to take breakfast in the hog cafe. We are treating the fox with medication to try and sort out the early signs of mange around the tail. The magpie keeps […] […]

Yesterday, I posted a video of a male ruby-throated hummingbird using a bush by the window as a shelter from the rain. Here are a few shots of the little beauty. Here’s the video in case you missed it. A few more hummingbird shots — Birds of New England.com

“Roll up, roll up folks.  Come and see the amazing spring.  One day only, be sure not to miss it.  roll up roll up” Perhaps I’m being a bit pessimistic but our little bit of England, whilst being ‘green and pleasant’, has been a bit, er, ‘under the weather’.  Others have been ok, over here […] […]