More whales have been found dead on the coasts of Scotland and Ireland following several strandings of the animals at the end of last month.

Eleven whales were found dead over the course of one week in August.

Whale and Dolphin Conservation said the toll had now risen to at least 58.

In Scotland, 20 whales were found beached in the Western Isles, 16 in Argyll and Bute and two in the Highlands. Twenty have stranded in Ireland.

One of the whales was found dead in Northern Ireland, and the rest in the Republic of Ireland.

Many of the animals that died were Cuvier’s and True’s beaked whales, which are a deep-diving species.

Some have been found dead along the shores of North Uist and Harris in the Western Isles.

Last month, Whale and Dolphin Conservation asked the UK’s Department for Environment, Food and Rural Affairs and the Scottish government to investigate the strandings.

Aki’s back on the water. This morning she and her humans boarded a small landing craft to visit an island lighthouse. We bounce up Favorite Channel and into the deep-water fjord called “Lynn Canal. Having just having finished reading a book about John Muir’s visit to these waters in the 1800’s, I try to imagine […]

via Aki or the Whales — Walking with Aki

Police officers were in for the highlight of their lives when a whale swam up to their boat to make friends. A video captured a whale swimming up to their patrol boat off of Queensland, Australia’s coast on Sunday. The whale popped in and out of the water to say hello, and put on a… 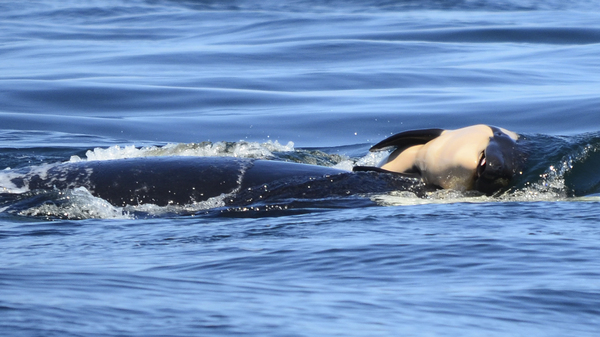 What began as a moment of joy ended in tragedy when the infant died last week. Since then its mother has refused to let go, holding her child tightly in what experts call a moving expression of grief.(Image credit: Michael Weiss/Center for Whale Research via AP)

via After Calf’s Death, Orca Mother Carries It For Days In ‘Tragic Tour Of Grief’ — News : NPR

Federal officials on Tuesday said they plan to make another attempt at rescuing a blue whale that has been entangled in a net in the Pacific Ocean off the coast of California. The 80-foot long blue whale was spotted on Monday caught in crab or fishing lines off the coast of Dana Point in southern…